I wasn’t planning on writing about this show, or at least doing a regular review of it. I don’t review everything I watch and you would be horrified if I did.  Or at least as horrified as my wife is at some of the crap I watch.  But this show, The Americans, isn’t crap.  At least of the shows I’ve seen this season, this is the best new drama to come out of TV in a while.   And yes, that is high praise considering how the quality of scripted dramas has improved over the past couple of years, due in part to the rise in original programming on basic and premium cable (sorry networks!).

My wife had wanted to watch this show when it premiered, and I agreed to watch it with her in the hopes that this would be a show that we could both like and watch together.  Because couples have to do things together, right?  However she was asleep before the opening scene.  I decided to stick it out and was glad I did. The basic gist of the show is that it’s about two Soviet KGB agents under deep cover in the US during the early 1980’s.  Living as man and wife, they speak perfect English; they have established cover identities, and to friends and neighbors appear to be a typical, middle class American couple.  A middle class couple that responds to orders from Moscow, kidnaps defectors, and kills if necessary to keep their secrets.  All the while driving their kids to after school activities and playing catch.  What could be more American?

Events in the pilot episode lead the KGB agents into trying to make their fake marriage a real one and the way the parent their children, who of course have no idea of their parents real identities or purpose, makes for some fascinating family drama.  Adding to the mix is an American FBI agent who works in counterintelligence who moves in across the street.  Not exactly the type of new neighbor these spies want.  Did he move there because the FBI is on to them?  Is he suspicious?  It all adds up to make a tense, neighborly relationship.

So why am I writing about this show now if I didn’t intend to review it?  Last night’s episode was fantastic.  It follows the day that Reagan was shot, following both the FBI and the KGB spies, forcing both to take big risks to get information that their respective governments need urgently.  I was blown away by the episode and thought to myself, “Self, shouldn’t others know about this show?”

So we’re only 3 episodes in so there is time to catch up with the show either online or on demand.  Frankly, there are plenty of ways to catch up, and I would do it before Moscow finds out.

Last week is the first time in President Obama’s presidency that the hypocrisy and double standards of the media has finally been realized by that same media.  It’s as if they are awakening from a long, four year nap.  President Obama’s DCI nominee John Brennan’s testimony last week brought public the administration’s policy on targeted drone killings.  As Brennan floundered trying to explain the policy, he was interrupted countless times by the far left anti war group Code Pink, which had previously been in a state of suspended animation since January 20, 2009. 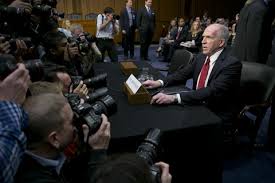 On Morning Joe, Kelly O’Donnell noted how differently this is being viewed then if this were a Dick Cheney policy.  In fact, with Joe gone for that segment, the table was 100% liberal, and even simple Mika Brzezinski seemed to realize that people’s reactions, including hers, to the issue of drones targeting American citizens, was based more on your allegiance to a Presidential administration than to the policy itself.  Only Obama sycophant Donnie Deutsch supported the President by supporting the administration’s policy of killing Americans.

If George W. Bush had told us that the “war on terror” gave him the right to execute a U.S. citizen overseas with a missile fired from a drone aircraft, without due process or judicial review, I’d have gone ballistic. It makes no difference that the president making this chilling claim is Barack Obama. What’s wrong is wrong.

Of course Robinson isn’t going ballistic over Obama’s policy.  But he at least recognizes that in theory, he should.

It’s not a new issue.  American citizen Anwar al-Awlaki, the Iman behind the Ft. Hood attack, was targeted and killed by a drone attack in 2011. I shed no tears over his death.  In fact, I’m glad he’s dead.    I personally have no problem with drone warfare.  It’s another tool in the toolbox and if it makes key Al-Qaeda leaders nervous and looking over their shoulder, so much the better.

But specifically targeting Americans is a different story.  There are plenty of situations in which an American forfeits normal due process; put on a Confederate or Wehrmacht uniform, and it’s open season on you on the battlefield.  Or hanging around a legitimate military target, whether it’s a terrorist training camp or terrorist leader is rolling the dice.  But that’s not the same as an American citizen being targeted for assassination by name off a target list that the President personally picks, without any sort of due process.  And in spite of White House assurances, I rather doubt it’s legal.

The fact that al-Awlaki was an American citizen was barely mentioned as a potential legal issue in the MSM  at the time of his killing.  But now the President is safely re-elected some liberals and the media are finally opening their eyes that with President Obama, they got a war on terror strategy very similar to the one they thought they voted out when Bush left office.  Of course, I’ve had my eyes open on Obama’s policy for a while and have given the President his props when I thought he deserved them, but for the left, which though they were voting out Gitmo, drone strikes, ”warrantless wiretapping,” and the Patriot Act ending up getting… Gitmo, drone strikes,”warrantless wiretapping,” and the Patriot Act.

And now, targeted assassination of Americans.

I’m guessing heavy doses of Ambien and off to dreamland again!