I enjoy the occasional sparring on the political forums.  Not because I expect to change anyone’s mind, but just for the entertainment of the process.  It’s like a hobby.  But occasionally I actually learn something new.  The other day, in the course of a discussion on, what else, Obamacare, my left leaning antagonist mentioned a quote by Speaker of the House John Boehner, alleging that Obamacare would be a major job killer for the years 2010 and 2011.  The time frame seemed a little squirrely, so I asked for a source.

And the adventure began.

The “source” turned out to be a link to ‘The Last Word,’ Larry O’Donnell’s MSNBC show.  O’Donnell referred to a video clip of Press Secretary Jay Carney saying that Boehner said that (at about the minute mark).

A video of somebody saying that somebody said something isn’t exactly my idea of a source.  At that point I decided to check Google.  Ten seconds later, I had this: 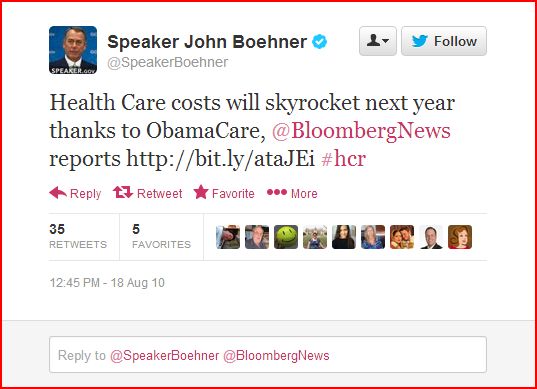 A tweet from Boehner of a Bloomberg News Report with the title, “Health Care costs will skyrocket next year thanks to ObamaCare.”  So there was never a Boehner quote. It was the title of an article.

Now I don’t blame my forum opponent so much.  Most lefties just depend on their usual propaganda sources and I didn’t have much expectation that he would have a legitimate source.  I don’t even blame Larry O’Donnell so much. His job is to be a propagandist for the administration. If he lies, well, consider the network he works for.  That’s what they do.  The entire network is geared to provide talking points.

But I do blame Jay Carney.  He’s the Press Secretary of the Obama administration.  He has an obligation to be factual, or at least as factual as should be expected at the time he says something.  Although he’s supposed to provide talking points, they are supposed to be somewhat moored to the truth.

But there is actually more blame to go around; the Washington Press Corps.  Carney made that statement in an entire room of Washington reporters.  Supposedly these are supposed to be savvy, insiders who should have sniffed out a falsehood.  Instead, they bought it hook, line, and sinker.  Not one of them had the presence of mind to fact check Carney.  So the fact that the White House Press Corps won’t do their job means that Carney, rather than functioning as the White House Press Secretary, gets to function as a Propagandist instead.