What the…I had just wrote a few days ago how the former FBI Director James Comey lied about reviewing emails having to do with the reopened Clinton email investigation during the final days of the 2016 election. Now in the “hold my beer” department the FBI tries to beat that breach of trust with another.

“An FBI intelligence analyst admitted to House committees last week that bureau officials were known to leak information to the press and then use the resulting articles to help obtain surveillance warrants, according to a source with knowledge of his testimony.

The source with knowledge of his statements confirmed to Fox News that Moffa said FBI personnel would use media reports based on information they leaked to justify applications for Foreign Intelligence Surveillance Act warrants.

The source told Fox News that Moffa acknowledged this “had been a practice in the past.””

So I feel vindicated in my belief that the FBI needs to be broken apart and demolished.  A free society cannot have this sort of routine lawlessness from their chief law enforcement agency.  Or we can choose not be a free society. 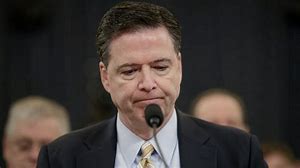 “When then-FBI Director James Comey announced he was closing the Hillary Clinton email investigation for a second time just days before the 2016 election, he certified to Congress that his agency had “reviewed all of the communications” discovered on a personal laptop used by Clinton’s closest aide, Huma Abedin, and her husband, Anthony Weiner.

At the time, many wondered how investigators managed over the course of one week to read the “hundreds of thousands” of emails residing on the machine, which had been a focus of a sex-crimes investigation of Weiner, a former Congressman.”

Yeah, no shit.  I remember pondering that very same thing in 2016.  The FBI announced that they had found almost 690,000 emails on Huma Abedin’s laptop, then days later the FBI announced, nothing to see here, they’ve all been checked and everything’s fine.  Here’s the thing though, even though I was incredulous that so many emails could actually have been checked so quickly, I believed them.

What a naïve fool I was.

“But virtually none of his account was true, a growing body of evidence reveals.

In fact, a technical glitch prevented FBI technicians from accurately comparing the new emails with the old emails. Only 3,077 of the 694,000 emails were directly reviewed for classified or incriminating information.”

What a difference two years makes.  Now, I think to myself, “Of course they lied!” I regard the FBI as an inherently corrupt institution, one that should be disassembled with the law enforcement functions sent over to the US Marshal’s and spin the counter intelligence functions…somewhere else.  I don’t know if we need a new agency for counterintelligence or  it’s function’s need to be absorbed into another existing agency, but I don’t see how the FBI, as currently constructed, can be allowed to continue to exist.  It’s already shown it’s more than willing to put its thumb on the scale of a US election, and  no government agency should be doing that.

I may still be a naïve fool but I would like to think such reform is still possible. 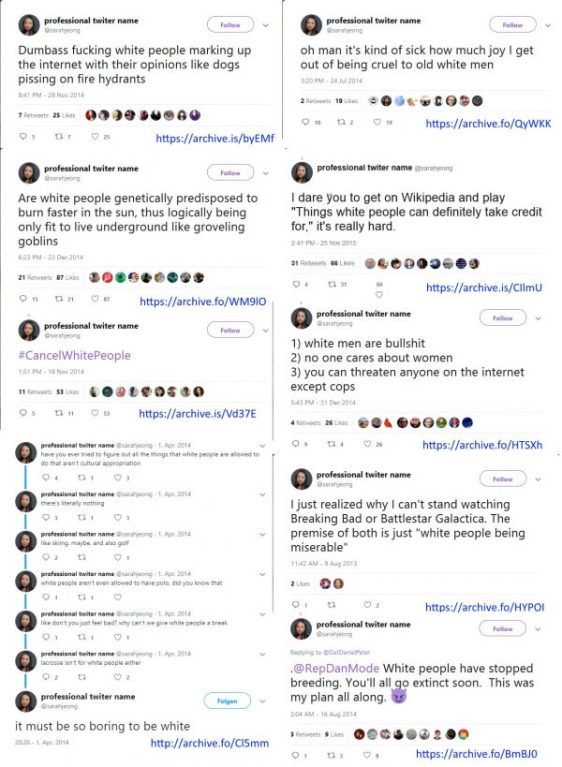 The Times was in full bore defense mode of their pick:

On Thursday, The Times released a statement saying that it knew about the tweets before hiring Ms. Jeong, 30, and that she would stay on the editorial board.

“Her journalism and the fact that she is a young Asian woman have made her a subject of frequent online harassment,” The Times said in its statement. “For a period of time she responded to that harassment by imitating the rhetoric of her harassers. She sees now that this approach only served to feed the vitriol that we too often see on social media.”

So virulent racism is OK as long as it’s used as a counter attack against trolls?  It’s a brand new argument which isn’t even remotely intellectually defensible, but it’s one I’ve seen copied across forums and message boards throughout the week.  Of course at this point I fully expected a defense of her hiring, I was just curious as to what form it would take.  It’s almost disappointing that they put such little effort in mounting a defense.  What makes Jeong’s tweets perfectly acceptable compared to say, Roseanne Barr’s comes down to, “it’s just different OK?”

Just a couple of observations…

In a political sense, this is good news for the GOP. The Democrats have really been driven off the rails this year with the party being pushed into indefensible positions on abolishing ICE and embracing socialism (whatever that means, and I suppose that most have no clue).  This is all in a year when the Democrats should have expected some Congressional gains. Instead, it’s turning into the “I don’t believe in borders, #CancelWhitePeople” party.  If Trump and the GOP have any wit about them, they’ll capitalize on this.  Every Democratic Congressional candidate should be asked about Jeong’s tweets, whether they are acceptable, is the New York Times supporting #CancelWhitePeople? “Candidate A, do you believe that white men are bullshit?”  They need to be made to own their crazy.

Also in a political sense, but in a more long run view, how does being the anti-white party influence Democratic Party prospects?  During the 2016 election, I observed that some of these guys really were serious about having a case of the ass for white people. Key to the Democrat’s “Demography is Destiny” voter replacement plan is that at least for the short run (the next two decades) white voters will continue to vote for the Democrats at about the same percentages.  But how much comparison to white people as “groveling goblins” can Democrat white voters handle?  I’ve no doubt that a certain type of NPR listening, sweater wearing, herbal tea drinking white person, reading Jeong’s tweets, could chuckle and say, “Yes we are the worst!”  Nor would this be anything but catnip to your typical white college radical; but what about families? Does the typical white Democratic voter with children really want to support a party that targets their children and see them as a problem?  I’m not so sure.

And that brings me to my final observation, that the lack of even a pretense of intellectual evenhandedness in the defense of Jeong shows that the left has gone full tribalism.  They are defending Jeong, not because she’s misunderstood, or there is merit to her tweets, but simply because they are in the same tribe and are defending one of their own. We live in an age when intellectual and political arguments are passé. The only thing that matters is which side you are one.

So how will this play out in the midterm elections?  I’ve already made my predictions, but hopefully at least through October Trump should be reminding voters what the “failing New York Times” thinks of them.