As you get older, it seems like these events come around more quickly…

WASHINGTON (Reuters) – The U.S. government will have to stop borrowing money between July and December if Washington doesn’t agree to raise a legal restriction on public debt, the Treasury Department said on Wednesday.

Hitting that so-called “debt ceiling” could trigger a U.S. default on its debt and an immediate recession, a risk that has become a regular facet of U.S. politics over the last decade.

The current debt limit was set in March. Treasury has been able to continue borrowing from investors by using accounting measures such as limiting government payments to public sector retirement funds.

Yes its debt ceiling time one again.  In fact, we’re so used to it now that the real debt ceiling was hit back in March and the Treasury just went into its automatic back up plan. With the Administration and Congress not talking to each other, constant fiscal crisis could become routine.

But that’s nothing compared to what’s coming.  According to OBM projections, starting in 2025, all of our federal government borrowing will go to finance the interest on the national debt, as illustrated in this handy chart: 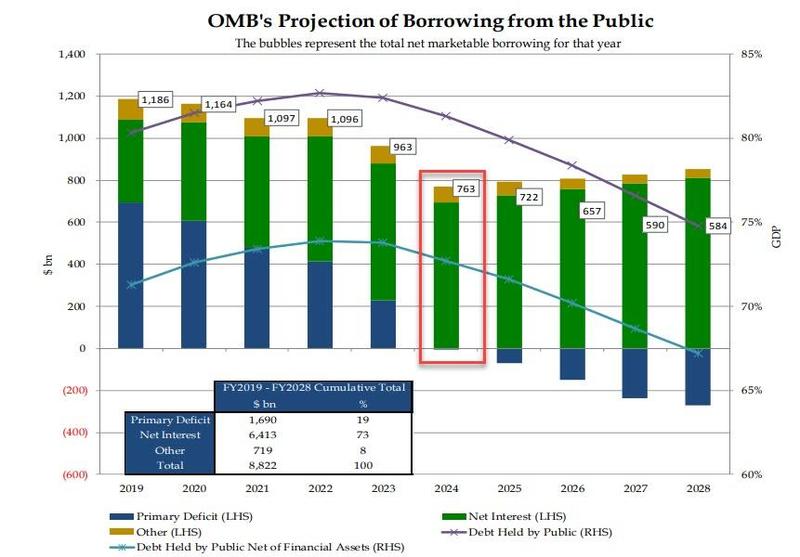 It’s like when you reach the point that you are getting cash advances on your credit cards to pay your minimum credit card payments on other cards.  Frankly, I don’t know what this really means in terms of the impact on our economy.  Will interest rates skyrocket?  Will we go into an instant recession?  Will inflation coming roaring back? I don’t know and I’m not sure anyone knows.  It would be nice to think that we could work through our problems and come to some sort of bipartisan agreement (*cough* Balanced Budget Amendment *cough*) but the odds of that seem a lot less than us all coming together and dealing with the debt ceiling crisis that’s coming up this year.

Hey just remember, I said SPOILERS right in the title!

In the movies, the Marvel Cinematic Universe (MCU) is probably one of the greatest film creations in movie history.  With 21 interlocking movies, each adding to a larger story that culminates in Avengers: Endgame, there has really been nothing like what Marvel Studios has accomplished, and it may be a feat never to be repeated. Certainly the rival DC Extended Universe (DCEU) has faltered and not even come close to competing with its Marvel rival.

In in that spirit, I feel (at least in this moment) that Avengers: Endgame is the greatest movie I’ve ever seen.  Not as a standalone movie by itself of course.  I imagine that if you were a casual movie goer, and had dropped in on Endgame without any familiarity with the previous MCU movies, it would be almost incomprehensible.  It’s a three hour densely packed film filled with various callbacks, easter eggs, and nods to previous films. It’s the sequel to the sequel to the sequel… Not to mention it’s the last chapter of a saga that began in 2008 with Iron Man.  Without having that background, the aforementioned casual movie goer would have walked out in disgust long before hitting the halfway mark of the three hour film.

And that’s the really amazing thing about it.  There have been plenty of movies with sequels and spin offs.  Some have been successful (think Terminator 2) and others have faltered (think Smokey and the Bandit 3), but they’re usually dependent on the viewer having seen the previous movie (or being fairly familiar with) to “get it.”  Endgame on the other hand, depends on the viewer probably having seen 15 or so of the previous 20 movies to appreciate the story arc.  That is an incredible ask of a movie goer, yet Avengers: Endgame did dare to ask and it paid off as one of the most successful films of all time.

I don’t see this particular feat being repeated in my lifetime, although I didn’t expect it the first time either, so whatever magic formula that Marvel Studios has bottled, keep it going.

The movie was jam packed, which probably explains why 3 hours didn’t seem like 3 hours, but it left so much left over to think about, that I’m still mulling some of the implications.

No redo for the “snap.”  There had been rumors for a year that Endgame would involve time travel of some sort, but I admit the actual way they used time travel took me surprise, with the consequences that they couldn’t go back in time and stop the decimation from actually happening.  It happened and couldn’t be changed.  That makes the MCU Earth radically different.  They dealt with half of Earth’s population vanishing in 2018 and returning in 2023.  That’s going to radically effect every single future MCU film since they will be living in a world where half the people in the world (and of course the universe) were, for all practical purposes, dead for 5 years, then suddenly came back.  It’s hard to quantify how that would change the world, and virtually all of the characters.  Not a single person would be unscathed by that.  Since the next MCU movie coming up is Spider-Man: Far from Home, that will be our first taste on how that’s handled.

Captain America’s Happy Ending.  The MCU time travel rules are that you can’t change the past, and going in time really means you are creating an alternate time line where anything goes, leaving your own “present” unchanged.  This really opens up a lot of fun opportunities because it’s time travel with no consequences, hence the fight between Captain America and the 2012 version of…Captain America. So at the end of the movie, when Cap goes back in time to return the infinity stones, he’s set to return 5 seconds later, however he doesn’t return.  Or rather he does, but as an old man sitting on a park bench.  Steve Rogers decided to get his happy ending by going back in time to the forties and marrying his best girl Peggy Carter.  But…we’ve had two seasons of Agent Carter, in which Rogers never returned so what happened?

The Russo Brothers, directors of the film, cleared that up in post movie premiere interviews.  Captain America didn’t change the timeline, he went back and created an alternate timeline in which he married Peggy Carter and…lived his life.  So there is a timeline where Captain America returned at the end of World War II, with all of the radical changes that would go along with that, but that didn’t change the MCU past.  In the MCU Prime Timeline, Carter married someone else, raised a family, and eventually died of old age. Left unexplained is how Steve Rogers got back to the main timeline to show up as an old man, but apparently there is an entire untold story as to how that happened.

A path to add X-Men & Mutants into the MCU.  With Disney’s purchase of Fox, all of the other Marvel characters can be brought under one roof, meaning characters such as the X-Men and the Fantastic Four can be brought into the MCU.  How can that be accomplished?  This is just an idea of mine, so I’ll toss it out there with no support at all, but Tony Stark, in designing his own Infinity Gauntlet into his Iron Man suit, must have given a little thought to what he might actually want to accomplish.  Some list of macro wishes might have been prepared ahead of time, such as that a tiny number of the people returned after the decimation might exhibit some powers…Mutant X-Men powers.  This isn’t the comic book version of the X-Men of course, but the MCU has been great at repurposing comic concepts and this would be version that would explain why we haven’t seen any mutants up to this point.

So my hat’s off to Marvel Studios for betting a lot of money on something that no movie studio had ever done before, and pulling it off.

For all of the entertainment value afforded by the three amigos of the Freshmen Democratic class; Alexandria Ocasio-Cortez, Rashida Talib, and Ilhan Omar; occasional nuggets of insight can be gleamed; particularly in the case of Ilhan Omar. Unlike AOC, whose gaffes are often hilariously dumb, Omar gaffes are of the Michael Kinsey variety; a politician unwittingly telling the truth.

Omar recently gave an interview in Vogue Arabia with this observation:

It’s a life lesson she has repeatedly turned to during her most challenging days – from being a refugee to being a black, Muslim, hijabi woman in the US. Her family fled the Somali civil war in 1991, staying in a refugee camp in Kenya for four years, before resettling in the US. Here, she was confronted with the differences between her and her new home. “It was the first time that all of the identities I carried and had pride in, became a source of tension,” she recalls. “When you’re a kid and you’re raised in an all-black, all- Muslim environment, nobody really talks to you about your identity. You just are. There is freedom in knowing that you are accepted as your full self. So the notion that there is a conflict with your identity in society was hard at the age of 12.”

There may be more than one way to read this, but it sounds as if she finds many qualities of a refugee camp favorable to living in the United States.  In a refugee camp, there wasn’t an issue of identity because everyone was a black Somali Muslim.  Here in the US on the other hand, you have infidels of all different shades, preventing you from being “accepted as your full self.”

So per Omar, if you can only be your “full self” within the confines of your own people, it almost sounds as if she is an alt-right nationalist (or tribalist). Well who’s kidding who?  There is no almost about it.  Omar is an ethno nationalist.  I wouldn’t really have a problem with that if she were in Somalia, but it bothers me a great deal that she’s essentially masquerading as an American legislator when she seems more comfortable being on the side of America’s enemies, as she did in her Black Hawk Down tweet.

One has to wonder why we even bother having a military when we allow the enemy a vote in the US Congress.