After years of trying everything but science fiction, from nerd reality shows, to Wrestling, it looks like the Syfy channel is coming home. 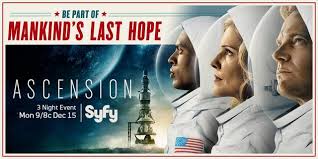 We started to see a few science fiction toes dip in the water with last December’s miniseries event, Ascension,   The 6 hour show, played over three nights, is the story of a secret nuclear powered generational starship, launched in 1963, on its way to Alpha Centauri.  The story is set in the present day as the ship reaches the half way point; there are factions on the ship that want to turn the ship around to head to earth.  Meanwhile on Earth the son of the founder of the Ascension program is doing his best to maintain the earth end of the program and keep it a secret.  There is a very big spoiler involved in all of this which I found absolutely delicious, and definitely defies your conceptions of what this show really is, however it’s nice to see an adult drama in a science fiction setting.  We’ve not really had a space opera like that since Battlestar Galactica.  In fact, that’s probably how the show was pitched; Mad Men meets Battlestar Galactica.  There is definitely a cultural stuck in amber effect since the crew left earth in the early 1960’s, without the benefit of women’s lib or the civil rights movement.  However the ship culture has evolved in interesting ways, and featured some political maneuvering that tops House of Cards in plausible political chess play.  Unfortunately this show wasn’t picked up, but even so, I recommend watching the miniseries when it’s available on DVD or for In Demand and streaming.

And January was the season two premiere of Helix.  This is another show that isn’t exactly what I thought it would be.  Before 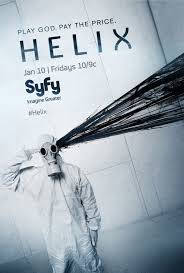 season one, just based on watching the promos and trailers I would have guessed Zombies meet Andromeda Strain.  However after watching the entirety of Season one, I can’t come up with a simple description of the premise, so I really don’t know how it was pitched to the networks.  Maybe they actually did pitch it as Zombies meet Andromeda Strain and then decided to do their own thing. In any case, it worked, and season two seemed to start off as almost an entirely new show, with the same characters but facing some entirely new challenges.  I guess I’m excited about this show because I can’t guess what they’re doing.  It’s nice to be surprised with good writing without resorting to the multitude of common TV tropes.

The TV adaptation of 12 Monkeys also premiered in January.  This time travel episodic TV series is based on the movie, but diverges quite a bit in order to make episodic TV work.  The basic plot is that in the plague decimated year of 2043, a small group of scientists are trying to send someone back in time to stop the virus from killing off 7 billion people in the first place. 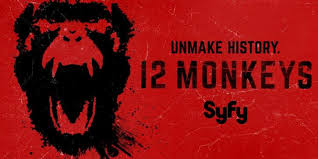 The show takes it’s time travel seriously and takes its characters seriously.  We don’t know much about the villains yet, but the heroes are flawed and have done some terrible things to save the world, and sometimes, their motives reveal much more personal motives than world saving.  It’s a great show and apparently enough people agree with me so that it’s already been renewed for another season.

And there seems to be even more, hard SF in store this year for Syfy.  2015 (sometime this year) should see the introduction of The Expanse, a space opera set within a future colonized solar system in which people living in the asteroid belt are oppressed by Earth and our heroes stumble across some sort of conspiracy.  The show sounded suspiciously like the Space Pirate idea that my son and I came up with last year over pizza.  I was almost on the phone with my attorneys, Dewey, Cheatum, & Howe, when I read that the Expanse is based on a book series by James S. A. Corey.  You may have gotten away with it this time Syfy…

Also in 2015 (again, sometime this year) two more space opera type shows are being produced for Syfy, Dark Matter is about a spaceship crew that come out of suspended animation with no memories of who they are and what they are doing there.  There is a lot of room for mystery there.  Also coming up is Killjoys about, who else, interplanetary bounty hunters. So take that Boba Fett.  That’s a lot of real science fiction on air.  So its good news, but I also hope it’s good science fiction.

As a longtime fan of the Stargate franchise, I was looking forward to the new entry in to the Stargate television family, Stargate Universe.  Although I have to admit I was a bit cautious in my expectations.  The Stargate shows, Stargate SG-1 and Stargate Atlantis, have been in my opinion damn near perfect science fiction TV.  The premise, that aliens thousands of years ago had kidnapped humans from Earth and settled them all over the galaxy as slaves via a Stargate, a massive ring that allows instantaneous travel between solar systems, allows just about any type of potential science fiction plot device.  In one episode the heroes could be halfway across the galaxy liberating humans from an evil alien overlord; in the next they could be downtown in Colorado Springs, getting a pizza.  Or sometimes in the same episode.  Humor and current pop culture references kept the show anchored in the here and now, while at the same time allowing the traditional action adventure in the stars.  Earth and the US Air Force manage to beat technologically superior aliens time and again.  Go us!

But when I first heard the premise of the show; humans trapped on an Ancient spaceship halfway across the universe, my first instinct was, “Uh oh, this is going to be Stargate’s Voyager.  Voyager was the second to last in the Star Trek shows, which has a starship from the Star Trek Federation… halfway across the galaxy.  The purpose was to take advantage of the Star Trek franchise but at the same time pull away from the usual cast of situations and aliens, which had started to grow stale.  It was a concept that had only meager success, and showed the franchise was on life support, finally flat lining during Star Trek Enterprise.

But the producers had promised an “edgier” Stargate than the previous incarnations.  Edgier?  Full frontual, or a FX-like use of profanity?  But setting down to watch the premiere episode I was afraid edgier would merely mean the same thing as it meant to the makers of Heroes; cut the lights off and film in the dark.  Note to TV producers: noir doesn’t mean filming without klieg lights.  At this point, the brightness level on my TV is all the way up and I still can’t see what’s going on in Heroes.  If I decide to finish the season for that show, I may just finish it as podcasts and listen to them since I can’t see what’s happening on the screen anyway.

And in the premiere episode Air, that started to look like what they meant.  The quick premise of the show, is that a planet that has unique properties and Stargate, has a secret military base.  The  Earth base personnel, who were on the planet to discover the mysteries of the “Ninth Chevron” figure out how to use the unique gate just as the planet comes under the attack of perfectly timed aliens.  Beating a hasty retreat through the Stargate, the base survivors discover themselves on board an Ancient (a humanlike highly technological race that disappeared tens of thousands of years ago in the Stargate mythology) starship, with no means to power the ship’s stargate to get back to Earth.

Naturally the ship is in total darkness when they board.  Edgy.

The first couple of episodes of the show revolve around the crew trying to wrap themselves around solving the most basic survival needs, as the episode names indicate, Air, Light, Water… Episodes filled with the grimness and stress of their situation, but little humor or action to break the ice.  Frankly, not bad episodes, but not great either.   However I’m embarrassed to say it took me until the most recent episode, Justice, to figure out what “edgy” was supposed to mean.

Galactica (the updated version, not the 1970’s feathered hair version) was almost revolutionary in it’s approach.  It stripped out the aliens, weird spatial phenomena, time travel, technobabble, and other props of the SF genre and just left the people; highly imperfect people.  Heroes were not always heroic, or truthful, villains were not always villainous, or lying.  Galactica raised the bar on TV science fiction, making it an adult drama, and the Emmy’s that Galactica won during its 5 season run bear that out.

So I consider myself fully on board with Stargate Universe now, and feel free to recommend the show, although with caveats.  While Galactica had me hooked with the first miniseries that launched the show, I’ve been mulling over Stargate Universe.  I was not hooked until recently.  It may be that just my expectations of what a Stargate show should be made me blind to what the producers were trying to do with this version of Stargate.  This isn’t your geeky father’s Stargate.  It definitely has a different feel to the show, dare I say edgier?

Why bring this up now?  The show has been on for months.

True, but the show is on a brief hiatus until the spring and tomorrow the Syfy channel is running all nine of the previously aired episodes back to back all day.  So if you are out of work, nerdy, and somehow missed the previous showings, now is a good opportunity to catch up.