Although we called it the fiscal cliff, I always imagined it as more of a fiscal log flume, in which as we slowly go over the edge we hold our arms out, feel our stomach drop, then scream until we hit the end, with water splashing all over us.  Whee!  That was a blast!  Want to go again?  But we can talk about the debt ceiling later. 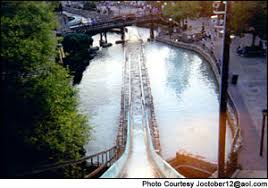 As deals go, it wasn’t a terrible one, particularly since the House Republicans had no cards to play, as I had pointed out previously.   What the House Republicans had was the total unpredictability of how they were going to vote on the deal.  Boehner didn’t even bother to whip the House body (easy now, I’m talking about getting a count of yes votes before the actual vote and politic to change some no’s to yeses).  He basically blew on his dice and was probably surprised that the House voted yes.

On the negative side, there were no spending cuts and not all of the tax cuts, particularly for the “rich”  were carried over, as I predicted two weeks ago.  So for all of the weeping, wailing, and gnashing of teeth, among conservatives of all types, we got as good of a deal as we were ever going to get; and easy to predict if you assumed that President Obama really would have liked to have taken us over the cliff, or if you prefer, log flume.  He would have been laughing all the way to the bottom.

On the positive side (yes there is one), the Bush tax cuts for those making under $450,000 for couples are now permanent.  So we don’t have to go through the end of the year farce of renewing these “temporary” cuts.  Same thing for the AMT tax.  They were fixed and made permanent.  The AMT fix, like the Medicare “doc fix” was an end of year ritual that couldn’t be resolved permanently.  Why you may ask?  Because any permanent fix would reflect in the CBO’s deficit and debt estimates for the years going forward.  Fixing the AMT for any one year was considered a cost for that particular year, but the CBO would base their estimates by current law, which would have the AMT not being fixed for the next year and every year afterwards.  Fixing the AMT for one year is a cost of 92 billion dollars.  A permanent fix it for the next ten years costs almost a trillion dollars.  From a purely crass, political position, having the costs of a permanent fix to the AMT and Bush income tax cuts accrued under the Obama administration ( two items that Republicans wanted to do but could never find the money for):

However all is not well in conservative talk radio land.  I made it a point to listen to what I think was a fair cross section of conservative radio for their take on all things fiscal cliffdom, and I must say, it was a muddled mess of incoherence.  They’ve been off their game since the election in my opinion really dropped the ball on the issues related to the fiscal cliff.  To summarize:

Rush:  No last name needed, you know who I mean.  Agreed with me (or is it I with him?) that Obama wanted to go over the cliff.  However he still wanted to oppose any deal that didn’t have the full Bush tax cuts and spending cuts.  And he regarded the deal that cut taxes as one that raised taxes; simply because not all the Bush cuts were included.  The practical result of his stonewalling any deal without the full Bush cuts?  All the tax cuts would have vanished.   Great job Rush!

Neal Boortz:  This odd combination of Paleo-Conservatism and Libertarianism also opposed any deal, however he thought that the Democratic Senate didn’t want to go over the cliff and would prevail upon Obama to accept all the Bush tax cuts rather than let them all expire.  Considering that after the failed vote on Plan B, The Republican House went home for Christmas, and ultimately didn’t vote on the deal until New Years Day, I would say events didn’t prove him correct.

Mark Levin:  Although I only caught his show once during the fiscal cliff debacle, Levin is being credited with organizing a call in campaign that helped bring about the defeat of Plan B.  Considering that from a conservative position Plan B was a better deal than the deal we actually got, I would have to say that turned out to not be a good move.

I think talk radio got it wrong on this one.  The deal wasn’t great, but it could have been so much worse considering that for the Democrats, going over the cliff was as close to a political dream situation as they could have hoped for, with Republicans being forced to bear all of the political costs.  I think conservatives should move on to the debt deal, a situation in which they have a bit more leverage.  That’s a situation guaranteed to generate several scowling Obama photos.

This is my first post in a month due to some catastrophic computer failures at home.  First, in a ridiculous tugging match over looking at a One Direction video, my son and daughter broke my daughter’s laptop screen.  Then, my son’s laptop just died.  No particular cause, but my tech savvy brother in law examined it and declared it DOA.  Then, the home’s main desktop computer suddenly went wonky (sorry if I’m using technical computer language here).  It was unable to boot up and unable to restore at an earlier point.  Again, another examination by my tech savvy brother in law produced a post mortem; this time with no data retrieval possible.  We had fried hard drive for dinner.

However I did have a backup drive that was set to automatically update on a daily basis only…awww.  It turns out the automatic backup was turned off.  My backup hadn’t been updated in a year.  Not least among catastrophes, I had about a dozen drafts for posts that were lost.  So after losing 3 computers in two weeks, plus a year’s worth of data, my posting took a hiatus.  Particularly since computer time became quite a bit more rationed around the house.  And I do have a back log of amusing cat videos to watch…

And speaking of catastrophic failures, that means missing an entire month of posting on the “fiscal cliff.”   I suppose it’s just as well.  Any prediction that I would have made about how the Republican Congress should have responded would have been wrong.  A month ago I would have assumed they were rational actors who understood the lessons of the election.  A month later it’s clear that isn’t the case.

Speaker Boehner’s Plan B failed a test vote in the House last night which in a way was a proxy vote for whether the Republican Party was smart enough to survive and rebuild (it isn’t).  Republicans have somehow managed to figure out a how to take a bad situation and compound it to make it worse.

Just a couple of points:

House Republicans should have just crafted a tactical withdrawal on this issue.  Since there was no way to win it, they could have at least minimized the damage by passing middle class tax cuts and minimizing the defense sequestration that is scheduled to devastate the defense budget next year.  As we learned from the Debt Ceiling talks, the longer you negotiate with Obama the more things he’s going to think of to throw in to queer the deal. The closer we get to January first, the more knickknacks and doo-dads Obama is going to insist on being thrown in. Any deal done now would require throwing in unemployment insurance; a condition that wasn’t on the radar last month.  At this rate, Obama will have Tea Party Republicans voting for Medicare for all.