For all of the entertainment value afforded by the three amigos of the Freshmen Democratic class; Alexandria Ocasio-Cortez, Rashida Talib, and Ilhan Omar; occasional nuggets of insight can be gleamed; particularly in the case of Ilhan Omar. Unlike AOC, whose gaffes are often hilariously dumb, Omar gaffes are of the Michael Kinsey variety; a politician unwittingly telling the truth.

Omar recently gave an interview in Vogue Arabia with this observation:

It’s a life lesson she has repeatedly turned to during her most challenging days – from being a refugee to being a black, Muslim, hijabi woman in the US. Her family fled the Somali civil war in 1991, staying in a refugee camp in Kenya for four years, before resettling in the US. Here, she was confronted with the differences between her and her new home. “It was the first time that all of the identities I carried and had pride in, became a source of tension,” she recalls. “When you’re a kid and you’re raised in an all-black, all- Muslim environment, nobody really talks to you about your identity. You just are. There is freedom in knowing that you are accepted as your full self. So the notion that there is a conflict with your identity in society was hard at the age of 12.”

There may be more than one way to read this, but it sounds as if she finds many qualities of a refugee camp favorable to living in the United States.  In a refugee camp, there wasn’t an issue of identity because everyone was a black Somali Muslim.  Here in the US on the other hand, you have infidels of all different shades, preventing you from being “accepted as your full self.”

So per Omar, if you can only be your “full self” within the confines of your own people, it almost sounds as if she is an alt-right nationalist (or tribalist). Well who’s kidding who?  There is no almost about it.  Omar is an ethno nationalist.  I wouldn’t really have a problem with that if she were in Somalia, but it bothers me a great deal that she’s essentially masquerading as an American legislator when she seems more comfortable being on the side of America’s enemies, as she did in her Black Hawk Down tweet.

One has to wonder why we even bother having a military when we allow the enemy a vote in the US Congress.

In an age when Hollywood has been totally mined out of original ideas for television, but the number of platforms have expanded with room for more and more television, comes the TV answer for zero ideas but lots of airtime to fill: The reboot. But it’s not enough to simply reboot old television shows, they need to be rebooted through a social justice warrior lens to give show concepts like this:

Just before he recently departed ABC Studios to embark on a rich overall deal at Netflix, Black-ish creator Kenya Barris sold one last high-profile project to ABC: Bewitched, a single camera, interracial blended family comedy based on the popular 1960s sitcom of the same name.

In Bewitched, written by Barris and Taylor, Samantha, a hardworking black single mom who happens to be a witch, marries Darren, a white mortal who happens to be a bit of a slacker. They struggle to navigate their differences as she discovers that even when a black girl is literally magic, she’s still not as powerful as a decently tall white man with a full head of hair in America.

This description of the show sounds hilarious for all the wrong reasons.  One would almost think it’s a parody of a socially aware TV reboot but no, it’s serious.  Am I intrigued by the description?  Darn right!  I would definitely sit down and watch a show in which an immortal magician is still under the thumb of Trump’s America.  The possibilities are endless!  I’m sure we can expect to see Samantha pulled over by white cops and she turns them into actual pigs, and she teaches the slacker Darren about hard work by transforming him into a black slave in the 1850’s. Nosy neighbor Gladys Kravitz will be the White Nationalist neighbor across the street, spying on the interracial couple. Uncle Arthur? Played by RuPaul of course! 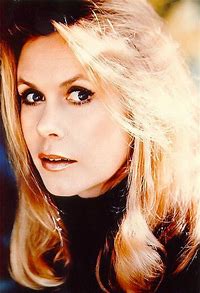 Just a few weeks prior there was the announcement that Joss Whedon was rebooting Buffy the Vampire Slayer, only this time with a Black Buffy. So everything old can be new again if you diversify it up a smidge.  Never mind that they already had a Black Slayer in the original run of the show…diversity.

I’m not opposed to reboots, reimagining’s, or however you want to describe them, with diversity, but let’s don’t pretend that diversity is actually a new idea. It’s really about saying,” I don’t have any new ideas, and I want approval from twitter.”

I will seriously watch this if it gets through development hell and actually airs somewhere.  Not because I think it will be quality entertainment, but because I expect it will be an entertaining hot mess.