Sometime during the early 1980’s I was reading a speculative science article about a concept called hypertext.  Now of course you can just click that helpful link to find out what it is, but chances are, you won’t have to.  If you’ve been on a computer at all, you know what hypertext is and if you are like me, you click on hypertext links maybe a hundred times a day.  But in the early 1980’s, when computer screens were small with green text, I couldn’t see the utility of a hypertext, let alone wrap my head around the concept.

And now I’m having another hypertext moment, and it’s called Playlist Live.  You can click on the (hypertext) link if you like to peruse the website as I did, but once again, I couldn’t wrap my head around it.  It appears to be a Comic Con for YouTube video bloggers.  Why there would be such a thing I can’t imagine.  What would be the point?  But apparently it’s some sort of big deal since my daughter wanted to go.  I farmed out the entire enterprise to her mother, since every time she would beg for Playlist Live tickets I would have to ask, “What is that again?”

So I’m not going to get the concept anytime soon.

So last weekend was the big event.  I guess.  I have to take my daughter’s word for it that it was a big deal.  It seems she went from booth to booth collecting autographs from these YouTube stars.  To me, that doesn’t seem to be much of a collectible.  On the other hand my parents wouldn’t have understood that my comic books that they threw out as when I was a kid could ever have any collectible value either.

Anyway, one these You Tube pseudo-stars, Tyler Oakley, created a video that I mocked in a post last year, The Real Dollar Store Diva.  I just didn’t believe, and still don’t, that some punk kid is a better shopper than I am.   So when my daughter got around to his booth, she told him that her Dad was the real Dollar Store Diva.  His reply?

As insults go, that ranks somewhere below, “I know I am but what are you?”  But I think my shopping accolades are still intact.  Now excuse me while I go load e-coupons on my Winn-Dixie Rewards card.

When it comes to immigration, I’m hearing this phrase echoed more and more by Republicans, “Let’s start that conversation by acknowledging we aren’t going to deport” the millions of illegal immigrants presently in the country.“

However I was really disappointed to hear that from Rand Paul.

Rand, as the most libertarian member of the Senate, may have come to his open borders ideas honestly.  Open labor markets are fundamental to libertarian thought, but the rote, we are not going to deport 12 million people (or 11 million, fill in your own number) is the first line in virtually any conversation with an establishment Republican about immigration.  In other words, we are going to have amnesty no matter what, so deal with it.

It’s clear that we are never going to have an equivalent of Operation Wetback.  That Eisenhower era program forcibly repatriated illegal aliens from California to Texas back to Mexico.  Although the estimates of the success of the program vary wildly, from 50,000 to 1.3 million, the estimates are much higher for the numbers of illegals who voluntarily left to avoid being detained and sent back by Operation Wetback.

However we don’t really have to go to such extremes.  Normal enforcement would take care of the illegal problem in a few years after we successfully sealed the border.  Don’t believe me?

So if the borders were sealed, using normal enforcement measures, illegal aliens would be largely gone in a little over 25 years.  However they would cease to be a major concern long before that. And that assumes there would be no self deportation, which has been occurring since the start of the financial crisis.  That’s certainly a quicker pace than the one we were promised after the 1986 Simpson-Mazzoli Act of 1986.  We are still waiting for the borders to be closed as promised with that bill.

So yes, we can deport millions.  We already deport hundreds of thousands every single year.  With an open border however, it’s just bailing out the ocean.  If we ever got serious about closing the border the numbers of illegal aliens in this country would start to reduce immediately.

So as soon as I hear, “well we are not going to deport millions of people…” I know the speaker is not interested in actually dealing with the problem of illegal immigration.  They are only interested in getting those illegals amnestied; the quicker the better.  That tells me who in Washington is serious about the problem and who isn’t.  Right now, it seems that virtually no one is interested in doing anything other than amnesty. 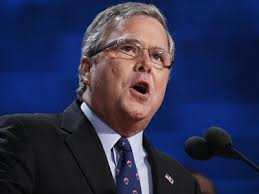 Jeb Bush started his book tour this week to promote his new book, Immigration Wars: Forging an American Solution, with Clint Bolick, and immediately ran into a brick wall.  On Morning Joe, Jeb almost immediately walked back on one of the central premises of the book; that illegal immigrants would be allowed to become legal residents, but not US citizens.

“So going forward — we wrote this last year — going forward, if there is a difference, you can craft that in law where you can have a path to citizenship where there isn’t an incentive for people to come illegally, I’m for it… I don’t have a problem with that. I don’t see how you do it, but I’m not smart enough to figure out every aspect of a really complex law.”

In other words, Bush pulled the legs out from under his own book.  That was the quickest retreat from a book since former Bush Secretary of the Treasury Paul O’Neill did a 60 Minutes interview promoting his book, which criticized the Bush administration; then went on the Today Show the very next day and backtracked on every single point from his book.

Jeb Bush has always been one of those open borders-let-every-illegal-in guys like his brother and most of the Republican establishment. So he’s always been in favor of a path to citizenship. So it was very odd that he came up with this book in which he supports merely legalization (like Newt Gingrich), rather than full citizenship.

Of course, the book was written last year, and what was the news about immigration last year?  It was the Republican primaries, and the guy with the toughest immigration policy, Mitt Romney, won the Republican primaries.  So it seems pretty obvious to me that Jeb was writing a book to appeal to Republican Primary voters.  My suspicion is that he never really switched positions, and that the purpose of the book was to present him as being in favor of a position to the right of what he actually expected to happen. By the time we get to the 2016 race, Immigration will more than likely be a done deal, and probably along the lines that Obama wants. No border security (to keep the illegal’s coming) and a path to citizenship. So Bush could claim to have opposed (using the book as proof) Obama’s plan, but hey, it’s already passed, Whatcha gonna do?

Jeb was the former governor of my State of Florida, so the man is no stranger, and as a governor, he was a very good governor; one of the better ones that Florida has had.  But as governor he had no control over Federal immigration policy.  As President (and this book seems to be step one for the 2016 race), no matter what he has written in his book, he would be as open borders / full citizenship on the issue as President Obama is.

In other words, he is totally untrustworthy on the issue of immigration.  No matter what he says, if he gets the chance, he’ll knock the fences down and shoot green cards over the border with T-Shirt cannon.

So let me get this straight.

Over the last ten months, the Republican House has passed two bills on dealing with the sequester cuts, where they’ve languished in a Senate dead zone, with Harry Reid refusing to bring them to the floor.

On Thursday, the Senate finally voted on their own sequester bills, a Republican one and a Democratic one.  Both failed.  Of course the White House actively opposed the Republican Bill.  Why was it so dangerous?  Because it would have removed the across the board cuts and given President Obama the flexibility to cut programs  to shelter some of the more critical government services from cuts.

That’s right.  The President actually opposed a bill that would give him the flexibility to shift the cuts around however he likes.  If that isn’t a complete abrogation of the President’s responsibility to govern, I can’t think what would be.  The President is calling this a crisis, but doesn’t want the authority to fix the crisis because… he might be accountable for something for once?

The President can stomp his feet and blame Republicans all he wants, but this is his failure.  And it’s the worse type of Presidential failure; deliberately choosing not to make decisions because they might be hard ones.

Voting present indeed.  What a farce.